His words could charm wild beasts, humble a haughty king, and wither hardy crops, but on the day that would begin his long exile, he had none to say but that he would one day return.  Long and looming had been the shadow of mystery which shrouded the ancient pillar that stood on the field of Magh Aidhne without answer, and by this was the erudite conscience of noble Senchan afflicted, and made to question his suitability to the role of high poet of Ireland; but its true threat was that it was all the pretense the miserly King Guaire needed to challenge the learning of this bard and his companions who had long burdened the treasury and strained the resources of the royal hall of Gort, and so dispose of their feckless service without consequence.  Shamed and cursed by his ignorance, Senchan was made by King’s command to wander the kingdoms and wilderness of the isles in a desperate search for the lost story of the pillar.  Senchan would find much of the world beyond the five kingdoms of Eire to have fallen into darkness and disorder, as hordes of barbarians had overthrown the great empire of Rome ; and his fragile hope would meet only disappointment and affrontery.


It would be at the discovery of the ancient battlefield of Camlann, that the poet finally fell into despair and madness, and it was only then that he would discover the true path to wisdom as a voice whispered to him from the shadows.  Senchan would from there on be guided by a companion of grotesque appearance and befuddling words, into a world of ancient magic and awe inspiring wonder to discover that the story of the pillar belonged to a greater tale that was beyond value to his people and their future destiny. 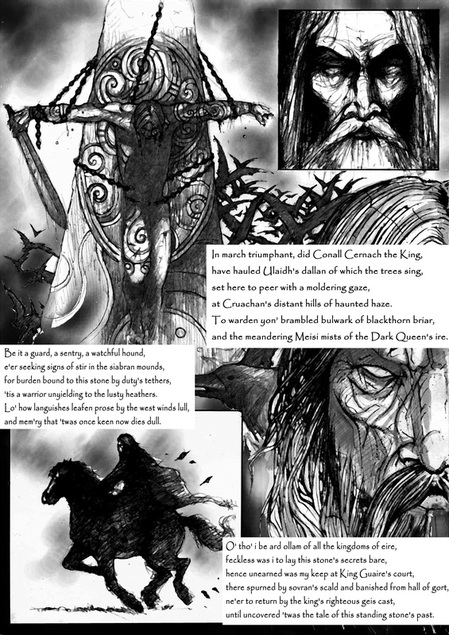 This is just teaser to the story that has been my latest project I am working on with fantastic writer/artist Cinaed Foley. Sharing same passion and interest in ancient world of celtic Ireland we are trying to tell story about forgotten times and heros. This graphic novel is still in early development stage so publication date has yet not been agreed. 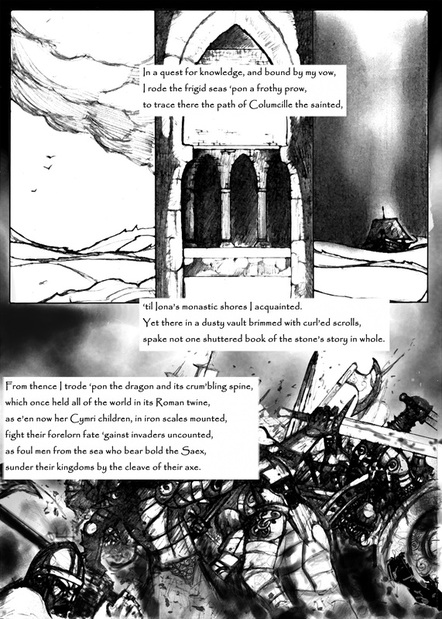